Welcome to Grandma's Ghosts, where you deal with loss, surprises, and possibly a cookie recipe.

This game was an entry for the DevSquad Academy Jam.

This was a really sweet game that brings back memories.

I really liked this game :)

Thanks for making me cry and thinking of my granny. great game. cute jokes.

Glad you liked the jokes. :D

I cried. This hit SO much harder than I thought it would... I know that grandma isn't real, but for a moment I mourned her too. I became the main character for a bit, and getting that cookie recipe and talking about grandma's little quirks, remembering the little things just broke me and made me accept her death at the same time. Great game, loved the artstyle, I'm crying about the death of my fictional grandma.

Wow, thanks a lot!

This was a short but sweet game. The ending was simple and those words made me tear up. I enjoyed it very much:)

So happy you enjoyed the ending!

i loved this game so much, the dialog, the characters and the writing was amazing!

I’m glad you enjoyed it. We had a lot of fun making it.

Reply
kouyuhime259 days ago
Played this on my channel with my little inlaws!  We all loved it and thought it was so cute!

We need a Grandpa's ghosts where you look for a fishing pole ;)

Thanks for playing! I really enjoyed watching your playthrough!

made me cry,, u r powerfu

It's good story though a little sad.

My condolences for the passing of your grandma. I’m sorry you had to experience that.

its fine i loved the game

I wasn't planning on crying to this short game but you two sure did a good job at having me sobbing over here. I really enjoyed the game and I'm in love with the art. Good job guys :')

Wow, thanks. I'm so glad you liked it!

The ending credits song did it for me- NO THESE ARE JUST EYE SWEAT OK, I'm not crying  T-T

Yes! I love that song!

I've cried over fictional characters three times this weekend, so pardon the emotional vulnerability. This game was exactly what I needed. My grandma died just over 3 years ago and she drank coffee all the time and made pickled beets and spent time with me in the backyard and made sure to have my favorite food on hand. She was my home, and this was such a beautiful legacy to the ways in which one person can hold space for and care for a number of souls. I've never dabbled in visual novels before, but you folks have definitely converted me. Thank you so much.

I’m so happy this game connected with you!

I'm not crying you are T-T

Reply
Thesist1 year ago
Cute little story, with a perfected itch.io page. I did enjoy this, and its simplicity.
Reply
Rusty Bailey1 year ago(+1)

Awesome, thanks for playing!

Hullo there! I just finished playing Grandma's Ghosts, and I really enjoyed it! You did a great job, and it looks so polished.

Even the Itch page looks polished, with the background and colours. It all looks so inviting!

I really like the art in this visual novel, with the pencil-like lineart. The colouring has a picture book quality to it, which I love. I think the music fits very well for the scenes. And I really liked the writing, it had humour and it made me like the player character interacting with the other characters (especially Victor). The sound effects were a nice touch, as well as the animation (cookie getting bitten, the phone vibrating, and the characters floating up and down).

Also, the song for the end credits gave me feels. >W<

You asked me to give some feedback on the visual novel? Again, I think the game feels very polished, so I'll try to give some critique moving forward to future projects:

- I think adding transitions (like a fade to/from black) when the player moves on to a new scene would help to show the passage of time.
- Adding a button to go back and see previous text would be helpful for players who accidentally mis-click. And adding an option to increase the speed of the text would be useful to readers.
- Lastly, I think adding a smiling expression for Mom's sprite (to switch to for when she makes a joke) would have helped to show the tone of her voice in the text.

You've done an amazing job on this game. I'm so glad to have played it!

I really appreciate the feedback! The transitions and facial expressions were simply things we ran out time to include. However, the QoL suggestions like text speed and a back button are not things I would have considered. Good to know for our next project! Thanks again. :)

OMG I`m crying so much... Thank you! I loved this game.

So glad you enjoyed it!

So glad you enjoyed it. That feeling of remembering the good times is exactly what we were going for. Thanks!

I loved this game. The jokes the mom was making were funny and I liked the different personalities of the ghosts. Ending was also very touching. Great game.

I loved it! Thanks for playing through our game.

this is the kind of game that ive found myself coming back to even after finishing it, and i think i'll keep coming back for a long time. there's just something so unique and charming about the silly little ghosts, the snippets of memories of a sweet grandmother that i somehow feel ive known all my life, and an ending that never fails to make me cry. it's a difficult feeling to describe, but its not a painful kind of crying. its like remembering that pet that died 5 years ago and feeling both fond memories and a dull ache of grief at the same time. both a celebration of life and a mourning of death. this game holds a special place in my heart. truly incredible work!

Wow, that really means a lot. I'm so glad you enjoyed it.

I believe you. :p

I am not crying, you are

Such a lovely story to experience. The art is really charming, I love the designs of the ghosts (Victor was my favorite, a spooky but gentle soul) and how the box containing their names each have a unique and cute container design. The story was very sweet and I enjoyed getting a glimpse into the fond memories this person had of their beloved grandma. You two did a great job with this. I'm certainly in the mood for cookies now!

That was awesome! I appreciate you fighting through your recording issues to create this. So glad you enjoyed it. :)

Super charming and funny! What a lovely story!!

Wow, so glad you enjoyed it and thanks for doing a video playthrough! The narration was awesome!

it's really beautiful. Not too complicated but really endearing, just like the artwork. Great job!

So happy you liked all of the artwork. :)

Wow. This truly made me cry. The characters are enjoyable, the pace, the music. It's just nice, like a little blueberry cookie. And the amount of artwork that went into this is incredible, thank you!

This comment means a lot. Thanks so much for playing and so glad you enjoyed it.

Holy, that was an pretty cool experience, looking forward your next game!

Ps: if you wish, I can translate it into Spanish!

I'm glad you enjoyed it! Not sure if we'll be translating this one, but we'll keep you in mind.

What a beautiful game! Really love the dialogue! By the way, I wonder how you make the text animation, it looks so nice and makes the dialogue more emotional!

Thanks, I'm glad you liked it. We used Text Animator for Unity for those effects. It was super easy to hook up and use.

Oh thanks for telling me! :D

I loved this short story, I found it charming, with a lot of character, and also moving towards the end. Great work to both of you!

Hello, I played the game just now and wanted to tell you that I enjoyed the dialogues so much! Really felt like I was talking to different ghosts, and they were super loveable <3

And the designs and the style are adorable!

Awesome! We're glad you liked it.

Nothing happens when I press either of em. =/

Sorry you're having problems playing the game. Seems to work for me on Windows in a Chrome browser. What are you playing on? Also, are you using mouse controls or keyboard?

Oh no I downloaded the game file you provided :3 Thats the one I played

I re-downloaded the file from itch.io to see if something was going on there, but it played fine for me. Maybe try using keyboard-only or mouse-only controls (whatever you didn't use before) or simply play the web version on this page. 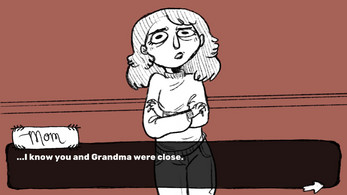 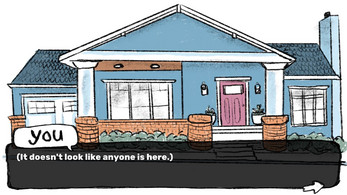 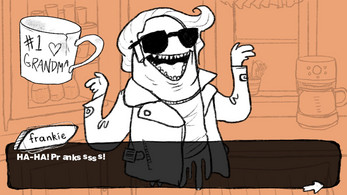 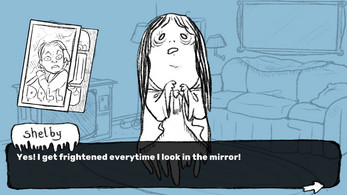 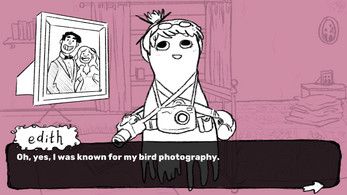